How to Make Comics: Pencils, Inks, Colors and Letters.

Yet another in a fine series of how comics are made here at Stately Stupendo-Dog Manor!

Hope you enjoy. This is more of a showcase of how we make comic books here instead a true how-to article. But it's darn interesting, at least for the inks and colors. Nick and Fooksie do a FAN-TASTIC job on this stuff, I'm glad they have fun and like to help out in making fun comics!


The first thing to come up with is the big idea.
I like to work in notebooks, usually spiral notebooks with a Sharpie Pen

, or a Micron Size 1 Marker. For Stupid Comic About Chickens, I was doing all my work in a drawing pad. (Most people get these things to draw in, I usually do actually draw a few drawings, then start writing stories. It's like an addiction.)

This is a photo of the actual comic book script to Stupid Comic About Chickens. 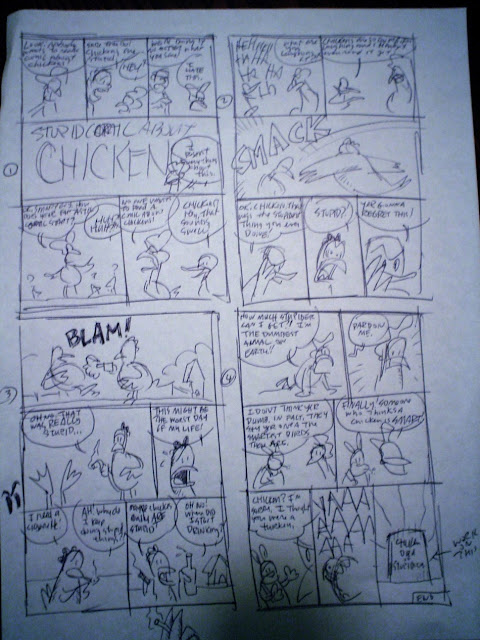 I like to work with words and pictures at the same time. If it's a comic I'm drawing for myself, I like to design the page and dialogue simultaneously. This is pretty similar to the "Marvel Style" of plot first, then pencils, but I do it al myself on the page. These are silly comedy stories, so I need to work out the timing between the art and what the characters are saying. Everything's got to flow, and I don't want to lose anyone, especially in a four-page story where every thing is happening good and fast. The other benefit to this method is that I write the dialogue in the roughs, so I know pretty much what will fit in a panel.

The pencils were drawn on Canson Fanboy

paper. I wrote an article about this paper and really can't say enough about it. It really handles pencils well, and when I use traditional inks, it does a great job. When I ink my own work, the pencils usually aren't as tight as they are here. This was the first story Nick was going to work on, so I wanted to make sure everything was there, so I wouldn't get on his nerves for being lazy. I liked what he showed me for samples and I didn't want to run the guy off. And it's a good thing I didn't, his inks are awesome! 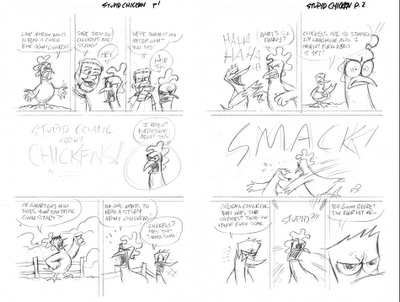 Once the pencils were done, I scanned

them in and did the lettering in Adobe Illustrator. The fonts are ACME Secret Agent and CreativeBlockBB from Blambot. They're good fonts and the dialogue fonts seem to have all the necessary characters.

I couldn't be happier with the inks. When I went looking for an inker, I was more interested in a collaborator/embellisher than a tracer. That's exactly what this guy does. I was at work when I got the first page, and I put it on my desktop and looked at it a lot during the day. I was really jazzed up when it came in and couldn't want for the whole package! 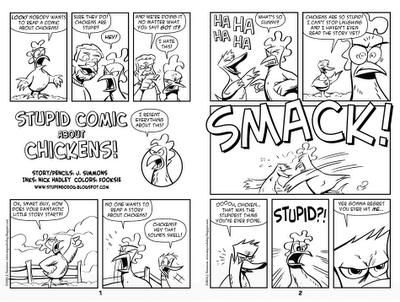 I met Fooksie from an ad on Digital Webbing looking for a colorist for my comic strip The Aliens! That strip was a ton of fun to work on, but I stopped it when the comics were generating more interest than a thrice-weekly comic strip. I miss The Aliens and have a plan to go back to them, but for now they're in semi-retirement waiting for the mother ship to arrive.

Anyway, Fooksie is a great, all around good guy, and I'm glad I crossed paths with him. I'd like to say we think the same way about color, but I think he's better. I always have an image in my head of what I want a story to look like and when I get the pages back I'm always blown away. I usually don't give any direction, unless it's something like the color of Stupendo-Dog and his costume, or simple things that (to me, anyway) are part of the design. And that right there is just about all there is to it!

I really enjoy the comic book making process, and I really like to be able to share how it all works. For me, the best part of this particular story is the great collaboration. And the color of the chicken. I thought he was red, but Fooksie must have known what color he REALLY was!

Email ThisBlogThis!Share to TwitterShare to FacebookShare to Pinterest
Labels: How to draw comic books